skip to main | skip to sidebar

Posted by Gando the Wandering Fool at 8:24 PM No comments:

Posted by Gando the Wandering Fool at 8:21 PM No comments:

Another Magic Online deck, this one is for the special format Commander which requires at least one legendary card (at least one of which must be the commander, this format being based on Elder Dragon Highlander.) The other requirement is that it be a 100 card singleton deck. (This means one each of maximum all cards that are not basic lands.) One restriction to mention is that your lands can only produce as many colors as your commander has so if you choose a commander with less than 5 colors your spells need to be castable and your activated abilities payable.


Posted by Gando the Wandering Fool at 5:50 PM 2 comments:
Labels: Magic: The Gathering

I've decided to use this space to put some of my online deck lists up for perusal.

A deck made for Magic Online, extended format:

Posted by Gando the Wandering Fool at 5:14 PM 1 comment:
Labels: Magic: The Gathering

I've often felt Joe Biden would be a good president. He has a presidential manner about him. Also I knew him way back when. In 1980 my Uncle, Stowell V Kessler after having successfully blown the whistle on corruption in the Juvenile corrections department in Delaware decided to throw his hat into the political ring because he was kind of washed up in social services in that state...He had been a class 3 social worker in JC and basically they tried very hard to shaft him because of his gadfly whistleblowing status.
I'd moved there to New Castle, Delaware to live with him because of troubles in my own immediate family. So I was drafted into the committee to elect via campaigning every day that summer through the developments of the area. He had decided to run for the office of state representitive and I was proud to help him out though having done some campaigning up here in nyc wasn't too thrilled at the prospect of doortodoor knocking. My cousin Richard and I hiked all over New Castle/Christiana and spoke to lots of people, handed out tons of literature and generally gave our sneakers a work out. I also started smoking at this time by the way. (What is it about politics and smoke?)

It was the famous election that Reaganomics took over by landslide and a democrat had a hard time getting elected even for dog catcher. I being a new yorker had little idea of Reagan beyond what the hippie friends my mom made had said about the California Governor. No one I knew had any clue that he was about to wreck our dreams so completely.

Anyway My uncle knew he had a very hard fight because the incumbant was a long-time republican with connections to Peirre Dupont the then governor of that state. (The Duponts have long been an entrenched political mechanism in Delaware. People think of Delaware as being a liberal northern state but it really isnt either of those things. There are way too many people there who consider themselves southerns and vote republican because its their "civic duty".) So he reached out to the Biden Campaign who was the current junior Senator for the state and also running an uphill battle against the Dupont machine. I got the opportunity to meet Senator Joe at that time at a picnic. He seemed very nice, down to earth and gritty. Though in a somewhat polished way. Clearly well-educated nevertheless his tastes definitely ran to the hotdog and mustard crowd. I was impressed. He reminded me strongly of Representive Johnathan Bingham from here in NYC (Riverdale). One of my mom's old friends. In fact he struck me as having the same integrity and gravitas. Now I was fifteen and honestly had no idea what those terms meant at the time but looking back I can put those words to the impression he made on me.

I was saddened whenever I saw him toss his hat in the ring of the presidential electoral process only to get kicked so resoundedly for his efforts. It's the same feeling I had when my uncle lost his election in a landslide defeat against a guy who didnt even bother to campaign really. My Uncle's slogan was "Enough is Enough" and I felt it quite fit him nicely. Stop the bullshit, people and give us a decent chance at fair play already. Stop the entitlements and kickbacks and backroom pork deals and get down to the business of setting this country straight again. Or at least get us started in the right direction. I still feel this today.

Well I listened to Joe talk the other day when they announced his official status as Vice Presidential running mate to Barak Obama who has a bit of that same gritty quality himself (though actually I can't tell if thats just a puton or actually how he really is. Only time will tell.) Anyway I really hope America awakens from its stupor from the last 8 years of "Bushwackery" and gets into what is really important. Preserving our cultural freedoms and independance while also allowing for a fair free market. I am personally a little sick of the errosion of central core USA values in the name of fearmongering and terrorism counterreaction. Yes terrorism is an issue and has been since I was a tot.

Yes terrorists are winning every time we abbrogate one of our citizen's freedoms in the name of National Security. So maybe we are in a catch-22 situation with that...but we need more creative solutions than what we have now. I really don't know if any of our current politicians can come up with what it will take to bring back our sense of liberty and wholesomeness we had pre9/11. I certainly have never felt safe since then. And often I've felt powerless and impotent to stop what seems like grossly disproportionate responses. As a folk singer/songwriter my role has been minor indeed. I guess I've inherited a little gadflyness from my Uncle though not his tremendous courage.

Stowell V. Kessler died last year around this time (June) after having proven some very important things about the history of apartheid in South Africa and getting his doctorate in theology in the process. He was a brave man to his core and didnt know when to back down off a subject and that courage saw him through to the end through several marriages/divorces, a war and being wounded in it, numerous personal crisises, and diabetes.

I miss my uncle and thats not the only reason Im voting for Obama/Biden but it is a powerful one.
Posted by Gando the Wandering Fool at 1:07 PM 1 comment:
Labels: Politics

Happy Birthday to me today :D

Yes once again it is that sad day of the year that marks yet another birthday has gone by. Well come..it hasnt actually passed yet. That would be tommorow. Anyway another year older and greyer and sadder. :)
Posted by Gando the Wandering Fool at 10:41 AM No comments:

The Chess Monster has landed on Planet Earth (here, yes :)). What does this mean you might ask? Well for one thing he brings a new form of chess to our midst. The simple of it is that you do not set up your peices as per normal...nor is castling the same as normal chess...More to come once he has revealed to us the rules of this amazing variant.
Posted by Gando the Wandering Fool at 10:23 PM No comments:
Older Posts Home
Subscribe to: Posts (Atom)

Gando the Wandering Fool
I've been playing D&D in some form or another since 1979. I'm a diehard gamer but currently am not really doing as much gaming as I'd like since most of the games I love cost money. I'm a singer songwriter with very mundane tastes. :) Just another of the dime-a-dozen people in this world trying to make my way without suffering too much unhappiness.

A tarot card I drew 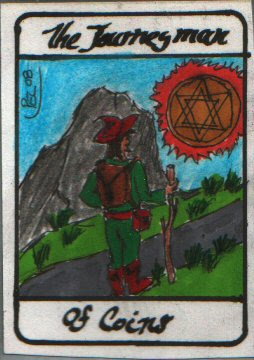